I’ve always been a fan of World War II gaming, and have collected a large number of resources for this conflict over the years. Since Too Fat Lardies released their Chain of Command rules, I’ve had the advantage of having an opponent in Dave Luff who is almost as keen to play as I am.

Over the past 18 months or so, as reported often on this blog, we’ve been steadily building scenery and painting figures  in preparation for fighting a large campaign. My preference is to fight with a German force, and Dave chose British Paratroopers, so it seemed natural to play a series of battles with these forces.

I’ve collected three books which we can use to refight many of the actions of the first hours and days of the battle.

Red Devils in the Night is a scenario book originally designed for the Battleground WWII skirmish rules.

It contains 13 scenarios which covers a number of actions in the first 12 hours of the battle – essentially all the initial actions of Operation Tonga. 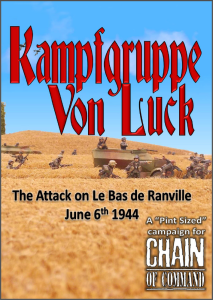 Kampfgruppe Von Luck is the second pint-sized campaign book for Chain of Command.

This campaign is based on the attack on the positions of the 6th Airborne Division around Ranville by elements of the 21st Panzer Division, under the command of Major Hans von Luck on 6th June 1944.

As such, this follows on almost immediately from the last scenario in the previous book.

This book is available as a PDF from Too Fat Lardies for £3.60

The third book is from the Skirmish Campaigns series.

Normandy ’44 – Red Devils of the Orne also contains 12 scenarios, which can be played as 3 linked campaigns.

This book has actions over the first few days of the invasion. Whilst a couple of the scenarios overlap a little with Red Devils, the majority cover other actions that 6th Airborne were involved in – many of which are desperate defence in the face of increasing German counter attacks.

These three book should provide over 30 battles for us to fight – this should keep us busy for most of the rest of the year.

The intention with this campaign is to provide After Action Reports for each battle.

Since The Winged Horse, or Pegasus, is the emblem of the British 6th Airborne Division, it seems natural to name our campaign accordingly.