Pocket Quest is a 6mm Dungeon Crawl game produced by Perfect 6 Miniatures and The Miniature Architect. 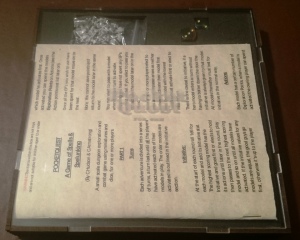 As you first look at it, this game is a thing of beauty. It comes in an MDF box which is just over 6″ square – this doubles not only as the game box, but also as a ‘Boss’ room in the game. 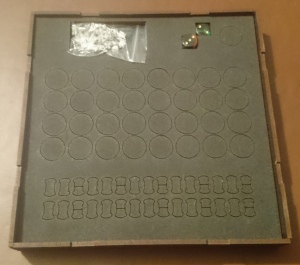 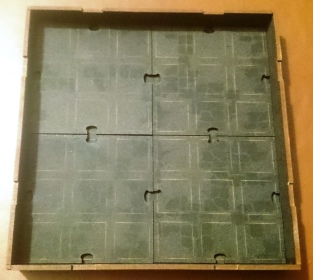 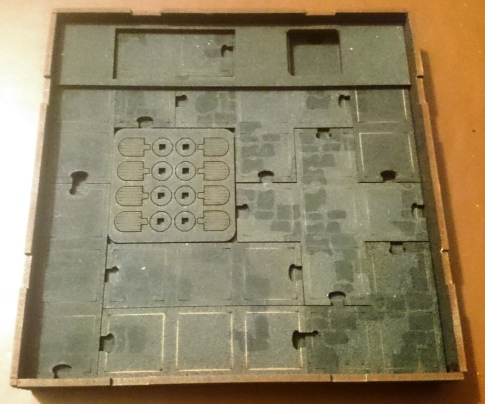 The next layers have a number of corridor sections, some small rooms, and then the main ‘Boss’ room.

Couple this with a set of MDF doors, and you have a rather marvellous little feat of engineering – which even all goes back in the box once you’ve unpacked it!

As you open the box there is that unmistakeable aroma of burnt wood – something a little different from the usual ‘new game smell’ – all the pieces are well made, and the dungeon kit looks great.

Then there are the miniatures. The have been put together from the fantasy range of Perfect Six Miniatures 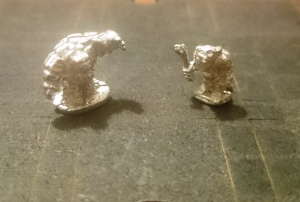 There are six heroes characters, and a host of bad guys. The game is themed around a dungeon full of Goblins and Orcs, and so the models match, with a mix of these figures, a couple of ‘Bosses’ in the shape of an Orc Warlord, a Shaman, a Troll and a Stone Golem, plus some swarms creatures : giant rats and spiders.

The figures are generally well cast and sculpted, with little flash.

We downloaded a couple of character sheets from the website, and worked our way through the character generation rules. (Dave commented that it was like being 10 again!)

Finally we were ready. We rolled for initiative, generated the first piece of dungeon, placed the first creatures…

…and ground to a halt.

With the best will in the world, it would be remiss of me not to point out that the rulebook is something of a mess. Whilst divided into three parts (Playing the Game, Character Creation, Dungeon Creation) it is very badly organised, with rules seeming placed as the authors thought of them, so rules covering doors, traps and corridors are in ‘Playing the Game’ rather than ‘Dungeon Creation’, and character stats and skills are dicussed in ‘Playing the Game’ rather than in ‘Character Creation’.

Most of the rules are there, it’s just that the rulebook could do with a major overhaul and re-edit.

But why did we grind to a halt?

Well, we could have carried on, but we would have made to make a couple of assumptions which may, or may not, have been correct. The gaping hole in the rules comes when placing wandering monsters on new terrain pieces – there are no rules which then describe how these new creatures fit in with the current turn sequence – so we hit a ‘what do we do now?’ question which didn’t have an obvious answer.

Yes, you can work it out (and, if fact, there is a description of the action for knocking down doors which sort of covers it) but the rules should be written clearly, without assumptions or hidden descriptions having to be made/found.

In truth, it’s a disappointment in what is otherwise a really good product, and one which is actually easily fixed. The rulebook is available as a PDF and the core mechanics look pretty sound, so it should not be too much work to sort out the rules.

We will certainly be giving this game another play in the near future.

You can purchase Pocket Quest from Miniature Architect and Perfect 6 Miniatures.

An FAQ and latest rules updates can be found here