“Those that fail to learn from history, are doomed to repeat it.”
Winston Churchill

It’s always dangerous when planning painting projects for the coming year, considering my track history. However, I am forever the optimist and have the best of intentions, and it is with this in mind that I put finger to keyboard and thus present a plan which I am sure will come back to haunt me before the end of the year.

I’ve really enjoyed painting Ashigaru and Samurai in the latter half of 2017, so I’d like to continue and finish painting all the box sets that I have for ToH – though considering that most of the box sets only contain enough models for half a force, I have yet to decide on how I am going to put all these warbands together.

However, the main thing I have to do for ToH is to build and paint scenery. I have a number of buildings, plus some trees that need basing – all this needs to be put together at the start of the year, especially as I have agreed to provide all the scenery for a table in the next Warring States day at Warlord Games.

Runewars is actually a very good game, but I didn’t play a lot of it this year because I hadn’t painted the miniatures. This is a state of affairs that needs to be corrected asap. I have recently decided on my colour schemes for the two armies in question, so I need to crack on with these asap – this will probably be my second job after the ToH scenery has been done.

This new game from Stand To Games arrived at the end of the year, and has a number of miniatures that will need painting (though it’s only 6-8 a side, so not that many really). In addition to the miniatures, I will also need some scenery suitable for the Peninsular War. Whether I make this myself, or buy some buildings from Charlie Foxtrot Models is another matter.

I bought three warbands (Mice, Rats & Foxes) from Oathsworn in their last Kickstarter campaign, and need to get these painted soon – certainly in time for the release of the new rules in April.

I managed to paint half of my Terran force last year, so completing them will be very good thing – plus it means that I might actually get to play this great sci-fi mass combat game. Since all the miniatures are 10mm, if you actually look at the physical surface area, I actually haven’t got that much left to paint.

Lord of the Rings Miniatures

I bought two LOTR armies last year – Dwarves and Goblins – plus I have figures for Uruk Hai and Elves (though not quite enough for a army of either, yet). These will need to get painted in time for the release of SotK in the middle of the year. 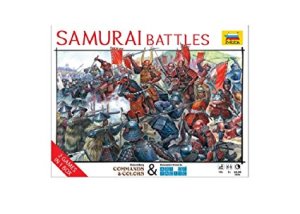 I own a copy of Samurai Battles by Zvezda Miniatures, which contains rules for playing Commands & Colours. Having painted 28mm models for skirmish, I am also tempted to paint these models for mass battle games (I have even bought some extra plastic miniature box sets) – this will probably be a project I will pick up later in the year

Although it’s a boardgame, the miniatures in Conan are certainly good enough to paint, and there is no doubt that the game looks great when played on the tabletop with painted minis. We are considering playing a campaign of Conan alongside Dungeon Saga next year, and so painting all the miniatures for the campaign game is a distinct possibility.

Again, a boardgame, so painting the miniatures is not necessary. However, these miniatures are gorgeous, so it would almost be a crime NOT to paint them. However, considering the sheer number of these, I think this is a project that is liable to take the whole year to complete.

No it’s not released yet, but this will need painting as soon as it arrives.

James asked if I had a timetable or priority list for this ‘wishlist of painting projects’ – so I thought I would put one together: