The next batch of miniatures on the list were the Goblin Scouts.

The first question is simple – what colour are they? Whilst most people would probably answer “Green” you may be surprised that in the Lord of the Rings they are never described as such. Goblins (and Orcs, as the term seemed almost interchangeable for Tolkien) were often described as black, brown or grey, or perhaps using terms such as ‘ swarthy’, but never green.

However, we are using the card artwork as our reference, and whilst some Goblins are indeed brown or greyish in colour, we are going for green in this instance. 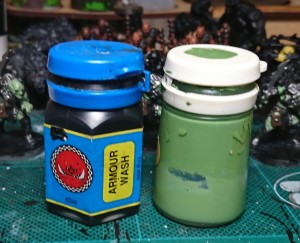 I wanted a light green colour, and so dug into the depths of my paint box and found an old pot of Citadel Goblin Green – this was from the original Citadel Paint Set (They didn’t label the pots back then) so I hate to think how old it is – 20+ years! However, it seemed to work a treat.

I am using Army Painter Gunmetal for the armoured weapons, but this does seem altogether far too bright and shiny for Goblins, so I also dug out another old paint – Citadel Armour Wash. Now, I must admit that I am not sure whether this is truly different, or just a marketing trick to get you to buy black ink under another name – either way it did the trick and the armour was suitable dulled, whilst still maintaining a metallic sheen.

The final touch was once again to give an all-over wash, but something slightly more subtle due to the light green skin tone (though I still wanted a brown colouring to give a slightly dirty feel to the figures) so I used Army Painter Soft Tone rather than the Strong Tone. The final result was just about what I was after.

Orc Hunters and Marauders are next on the list.