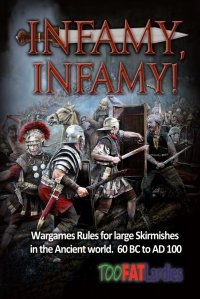 Last weekend saw myself and The Halfling Hickman travel down to the Forest of Dean for a day of gaming with Matt Slade and Ralph Plowman – we were also joined by Mark, a friend of Matt’s from the USA.

The morning was spent playing a game of ‘Infamy, Infamy!’ – the new ancient skirmish rules from Too Far Lardies. The setting for these rules is around the time of Caesar’s invasion of Gaul, so the main force lists include Caesar’s Legions, plus Gauls, Germanic Tribes, Ancient British plus forces from the Slaves revolt (I’m Spartacus!) and the Roman civil war with Pompey.

I believe the game will also include forces for the slightly later Early Imperial Rome era, though I think this is still very much ‘in the works’. The game is currently in phase II playtesting, so much work is still to be done. However, the cover of these rules (above) has just been revealed. 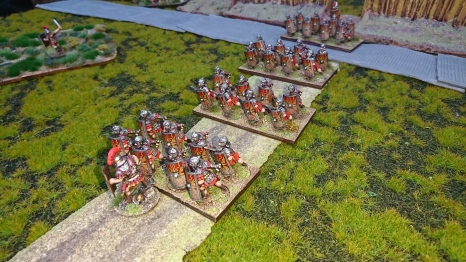 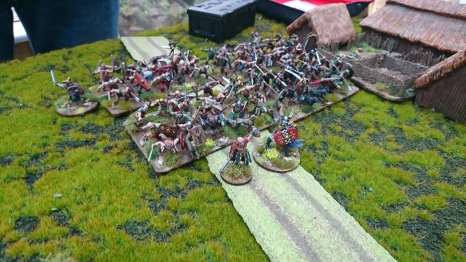 The table was set up with the Roman deployment points being at the gate of a fort in the middle of one table edge, plus some places a little more forward in an area of swamp, and on a wooded hill. The Celts I was facing had decided to make a nuisance of themselves near a small gathering of dwellings, with deployment points being behind a cairn of rocks, in a piece of marsh and then in two groups of trees. These are all originally designated as Ambush points, but the Roman player has the option to change two of these (at least, We did in the scenario we played)

As the Roman forces set up, Ralph was keen to point out how bad ambushes were to face. From the stress he gave to these arguements, it was clear that he was badly traumatised by their use in his previous game.

The Roman forces consisted of:

The Celtic Forces (As far as I became aware of that is) consisted of:

The game is card driven, much in the same way as Sharp Practice 2, with cards in the deck for the leaders, plus each light unit. In a difference from SP2, each play holds a number of Infamy! Cards at the start of the game (these are similar to flags in SP) and only go into the deck once they have been played. This represents the fact that force commanders are more likely to start losing tight control of their troops as the battle continues. 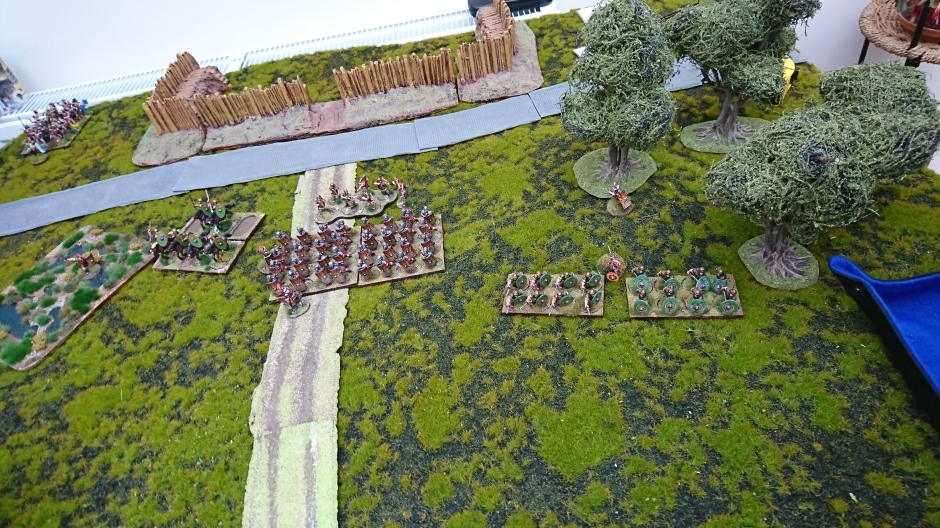 As the first couple of turns started, I was keen to deploy my troops and get them into a rough battle formation. The Legionaries moved into close formation on the road and were flanked by the Auxiliary Infantry and Cavalry, with the archers behind them (as they can fire over the heads of friendly troops). The idea was for the Auxiliary units to advance along the flanks to within enough distance to deny the enemy the use of their closest deployment points.

Dave seemed happy enough for me to do this, as he was concentrating on building up fervour on his main warband force. Fervour is a new mechanic which reflects the way which barbarian forces psyched themselves up for battle before unleashing their fierce charge. If you play any Lardy rules you will be familiar with the concept of shock. Think of fervour as the antithesis of shock, which gives the equivalent bonuses to movement and combat when shock gives negative adjustments. 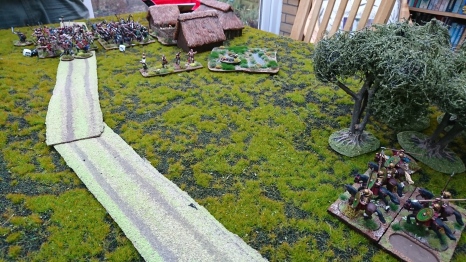 As the Auxiliary units advanced they encountered units of slingers. Javelins and slingshot were exchanged with minor casualties caused to each side.

The cavalry advanced in an attempt to perform a hit and run on the slingers, only to be ambushed by a unit of fanatics.

The unit of horse was unable to evade the naked tribesman, suffered an excess of shock in the resultant combat and withdrew from the battle.

Meanwhile, on the other flank, the Auxiliary Infantry were surprised to their rear by the sudden appearance of a new enemy ambush marker, followed by two units of chariots charging them. The combat was somewhat brutal, leaving one Auxiliary unit standing whilst the other was forced to retire. 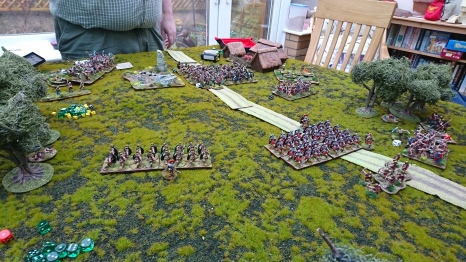 The Romans were suddenly in a position of having both of their flanks exposed with the main Celtic force getting ready to unleash their charge.

Unfortunately, we had to leave the game at that point, otherwise the local chippy would have been shut and lunch plans would have been ruinec, but the game seemed to be finely balanced – it would have been interesting to see what happened on the clash between the two main groups of warriors.

Overall first impressions of the game are very positive. The mechanics of the barbarian horde look very interesting, especially with the ongoing threat of ambush, which reflects the Romans operating in hostile territory.

I didn’t get to explore the full potential of Roman drill abilities, but they appear to be very useful indeed, depending upon the circumstance.

There is much in the game which is familiar if you have played previous TFL titles. The new rules seem to reflect the difference in approach from the barbarians to the Romans very well, and I look forward to seeing this appear on my own table in a few months time. 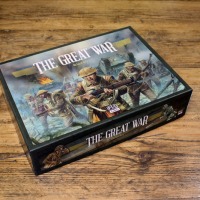 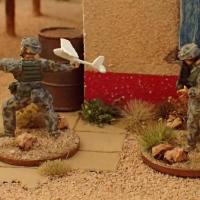