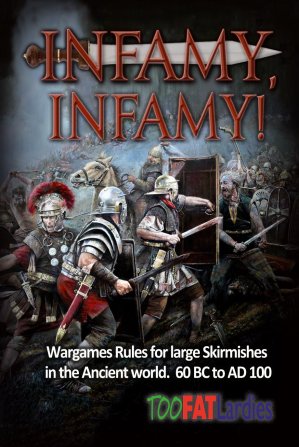 If you are a fan of Too Fat Lardies rules and follow them on social media, it will have been difficult to miss the fact that they are currently working on a set of large skirmish rules for the Roman period – Infamy, Infamy!

I have now had the pleasure of playing these rules twice – once as already mentioned on this blog – then again at the Hammerhead show last weekend (was it only last weekend? It seems so much longer ago than that – much has happened in the world since then , but that is another story…)

I am a big fan of the period, so it is perhaps inevitable that I am definitely going to be buying these rules when they are released.

However, there are a couple of questions to be answered before the project can begin…

As far as I understand it, Infamy, Infamy! will cover two different periods of conflict, and thus two different Roman armies – the legions of the late Republic as they operated under the Marian reforms, made most notable by campaigns of Julius Caesar, and the legions of Early Empire as created by Augustus.

When it comes to deciding which one to model in miniature, I am somewhat torn.

From an historical perspective, I find the campaigns of Caesar to be the most interesting – from the Conquest of Gaul to the Civil War with Pompey. Throw the Third Servile War into the mix and you have a wonderful assortment of battles to be fought.

The trouble is, from an aesthetic point-of-view, Caesar’s legions were a bit of a rag-tag looking bunch. Whilst the legionaries were of typical Roman appearance, the vast majority of the auxiliary troops wore their native garb. It makes the overall army look a little…untidy.

There is no doubt in my mind that if you want the personification of the Roman army, it is found in the legions of the Early Empire. At this point the auxiliary units were now more uniformly equipped and from the aspect of collecting model soldiers, there is nothing more pleasing to the eye than a Roman force from this period – and there are still an interesting blend of campaigns to be fought.

It’s hard to argue against the fact that the game looks fantastic when played with 28mm miniatures, so many people will have that as their ‘default’ setting when thinking about buying miniatures. Obviously, this also has the potential to be the most expensive option when it comes to collecting an army.

If I wanted to pursue the direction of Caesar’s legions in 28mm, I could choose the cheaper option of building most of my force in plastic – Warlord have several boxes of legionaries which would suffice for the bulk of an army in their range for Hail Caesar and SPQR. I must admit, though the cost reduction is significant, I am not a huge fan of building plastic miniatures, and these days would be more inclined towards metals rather than plastics.

So, if I was going down the metal 28mm route, I would look no further than the Foundry range of Caesarian Romans. Mark Copplestone is one of my favourite sculptors and this range of figures is absolutely lovely. However, the cost becomes significantly higher – at least triple that of the plastic equivalent, though the amount of time saved by not having to build them is certainly justifiable if you have the budget.

Looking at the later period, there are a few more plastic options available, with a choice between Warlord and Victrix. There are lots of metal choices – as luck would have it issue 107 of Wargames Soldiers & Strategy has Early Imperial Rome as its theme and contains a fairly comprehensive guide to buying Roman figures for this period.

An alternative, given the option of cost, would be to do this is a smaller scale. I have proven in the past that Chain of Command works well in 15mm, and I suspect it would work just as well for Infamy, Infamy! Again, there are numerous choices of manufacturer in this scale, but I think my favourites are Forged in Battle. Their War and Empire range for both periods are extensive, and pricing works out around the equivalent of 28mm plastics – perhaps slightly cheaper.

Of course, if you really wanted to look at budget figures, the 20mm plastic ranges from the likes of Hat, Italeri and Zvezda might be worth a look.

Playing with what you already own

There is, of course, another option, which will involve spending very little money, if indeed I would need to spend anything at all.

What is it you ask?

A few years ago myself and Dave Luff were playing several Ancients sets of rules, including Sword and Spear, Polemos SPQR and Impetus. Dave has a couple of armies (EIR and Celt) and I have several armies for Late Republican era, having collected all the armies for the Basic Impetus army lists of this period in 6mm. I came across them a couple of weeks ago whilst sorting out some other things.

Admittedly, the game wouldn’t look anywhere near as pretty, or at least, would have a completely different aesthetic, but it could be played on a much smaller playing area and it would only cost me the time it would take to paint the miniatures.