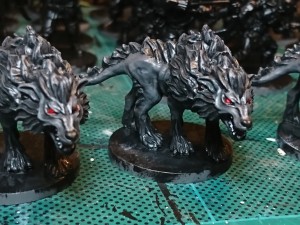 I thought that I would start with something easy – the Wargs. These are big models with very pronounced detail. The first question is: what colour to paint them? With [...]

The first step, at least when painting models, always seems to be the most labourious. Since these are plastic miniatures I decided to give them a good wash and scrub with an [...]

This weekend is a bank holiday in the UK, and I will find myself left to my own devices for the weekend – so I decided to set myself a challenge. The task is, on the [...]

It has taken almost a full month, but the Gnoll warband has been finished. The undercoat \ basecoat was applied to the models on March 31st. Since then work on them has been [...]

Yesterday was spent working on the basing of the figures I have recently painted, with the result that all the miniatures (well, all bar a couple of birds) for the first [...]

I have probably mentioned several times in the last that I am something of an enforced painted – I paint because I really don’t like the look of bare plastic and [...] 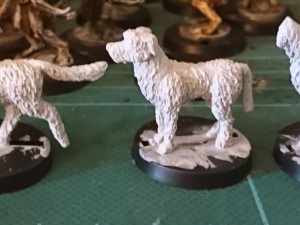 They say that Man’s best friend in his dog. Well, in Rangers of Shadow Deep (reviewed on podcast episode 262) there is a good chance that in a four player game a [...]

February turned out to be a much better month for painting than January had been. Not only did I finally finish those damned Normans, but I also made a start on all the [...]

Back in August 2016 I started building several new cavalry units for a Breton force for Saga, using the plastic Norman Cavalry from Conquest Games. More information can be [...]

Deep Madness is a new boardgame from Diemension Games, originally funded via a Kickstarter project in November 2016 and delivered – admittedly almost a year late [...]

October turned out to be another somewhat frugal month on the painting table… Painted: 10   I did manage to get the two Gangs of Rome mobs that I needed for the [...]

Radio Dish Dash – authors of the Skirmish Sangin modern rules – are no stranger to gaming modern warfare. They are currently running a kickstarter to help fund [...]

Crooked Dice are currently running a Kickstarter to fund a new box set for their popular 7TV miniatures skirmish game. Whilst the original box set explores the world of [...]

It’s probably the best dragon ever made, but most people aren’t aware of it. Back in 2008, Andy from Heresy Miniatures decided that he wanted to make a dragon [...]

You may remember back on episode 198 of the podcast we spoke with Craig Thompson of Tiny Terrain Models. Well, Craig is currently running a new Kickstarter campaign – a [...] 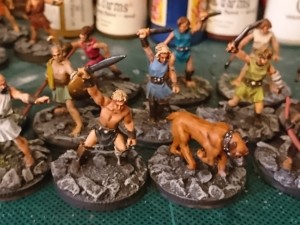 My plan for September was for it to be a big follow up to my minor victory of actually getting some figures painted in August. As it turned out, it wasn’t quite as big [...]

Last Sunday (9th September) saw 16 contenders for the title of ‘East Midlands Iron Man’ meet up in the heart of Leicestershire (Market Harborough to be precise) [...]

I recently finished painting my latest Gangs of Rome miniatures. A few comments have been made about how they liked the white on the models, so I thought I would share how I [...]