Spoiler Warning – the following post contains spoilers for the ‘Bones of Arnor’ campaign from Lord of the Rings: Journeys in Middle Earth. Please do not read if you have yet to play this campaign and do not wish to know potential plot reveals.

This is our second attempt at the Bones of Arnor campaign for Journeys in Middle Earth from Fantasy Flight Games. We managed to fail the first campaign when playing as Aragorn (Josh) and Legolas (Neil). This time around Josh is playing Bilbo, whilst I am playing Beravor. 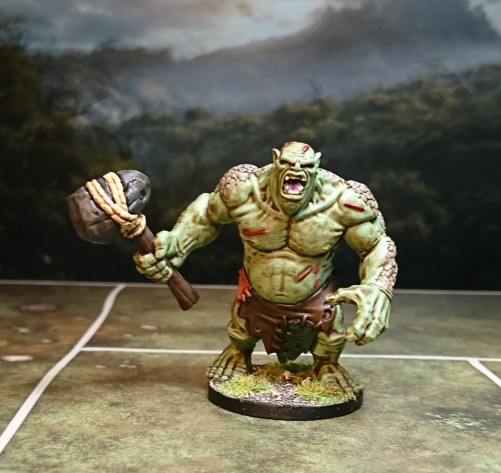 At the end of the last scenario, we had the option of making a detour from our road in order to deal with Ulûk the Hill Troll, who had briefly pursued us during the last game. The first time around the campaign we decided to avoid this confrontation. This time, despite the fact that we were using two characters who were perhaps less equipped to deal head on with a Troll, we thought “what the heck” and went for it.

As it turns out, the Troll hunt side mission takes place over two scenarios, though it is possible to fail the first and therefore not discover the location of Ulûk in order to confront him in battle.

The first scenario takes place using the map tiles, as you explore a dark cave system, looking for possible clues as to the whereabouts of the troll. You start by encountering several groups of Goblin Scouts, and the map tiles contain lots of threat counters. The scenario has a threat threshold of 30, and we managed to complete it on the final turn, finding tracks to a cavern…

…at this point, the next scenario starts, taking place on a single skirmish board. There is a pit in the middle of the room which is surrounded by four statues, plus there are some chains and hooks on the floor. You can interact with the statues to push them over onto the troll, which causes damage. 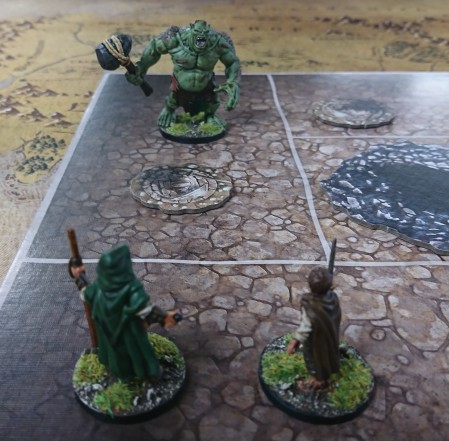 We started adjacent to the troll, so the plan was for Beravor to attack the Troll with her staff (which has stun) and then for Bilbo to follow up and push a statue onto the stunned creature. This sort of worked over the course of a couple of turns, but we were hampered by the fact that Ulûk is an elite creature, so can counter-attack even when stunned.

The other issue is that the battle takes place in a dark cavern, so characters are having to take skill tests at the end of each turn to avoid taking additional fear.
Beravor, managed to have a spectacularly bad turn – not only causing very little damage, but subsequently failing the skill test, hitting maximum fear and failing the subsequent last stand. This left Bilbo with one turn to kill the troll, which he just managed. The troll fell dead and we congratulated ourselves, hitting continue on the app, expecting to be congratulated on our victory…

…only for Ulûk to get back to his feet for a second round of combat (much like Gûlgator does in the first skirmish). Since Beravor had been defeated we failed the scenario. As we subsequently joked, basically, we botched killing the troll because a ranger was afraid of the dark.

Failing this task added a weakness into our deck for future scenarios, and we know we will end up encountering Ulûk again.

We continue to enjoy this game and are looking forward to our next session, even whilst planning who we are going to play when we play this campaign for a third time.